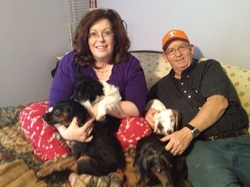 Update!  Winker - now Bailey,  was adopted January 5, 2013.  He is totally in his element with four humans in his pack to love, and an additional three doggies his own size.  Two of which spend lots of time playing with him!

Thank you so very much Cathy & Vernon!

This doesn't bother him though, because he has never known life any other way.

Wink learns his way around quite readily, and his greatest enjoyment is racing around the yard in the crisp fallen leaves.

He is a total case!  Loves to bite and wrestle, and is always trying to get the other dogs to play with him.  They treat him like a pesky flea and try to avoid him.

Winker is up to date on his vaccinations, though I won't allow him to be neutered until he has reached the age of six months.

I became a Foster Failure with Winker.  I did find the perfect home for him and he (now Bailey) is loved to the moon.

His new family is stupendous, and they adore this little guy.so much.

My problem was I got Wink when he was only eight weeks old, and because he was so young, I took him to my bed with me each night.  Once I arranged his adoption and he left with Cathy & Vernon, I found I couldn't sleep at night without him.

I even considered driving to his new home and begging for him to be returned to me.  God does work in mysterious ways, after three weeks of no sleep, Winker's half sister became available for adoption.She was 20 days older than Wink, and after another week, I decided to adopt her.

Like Bailey (Wink), her inbreeding came with troubles.  She is slightly deformed, and deals with dwarfism along with alopecia.  There is nothing that will help the deformities in her legs and feet, or the genetic alopecia, but we will have the good life, just as Cathy, Vernon and Bailey are.

Foster Failure and Loving it, though my Bambi had been trained to puppy pads, and getting past that was quite a project.
Never say never, seven years ago after adopting Scrappy & Domino as puppies I said never again.  Well, here I am, once again raising a puppy...